Happy 29th of February everyone!

In celebration of the leap year, I would like to share with you a movie I recently discovered about the February 29 curse, or well, maybe something related to it. 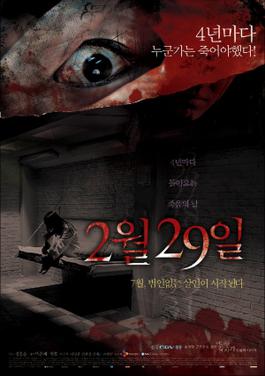 February 29 is a part of the Four Horror Tales film series.

One fateful night, a tollgate ticket girl, Ji-Yeon was given a bloodstained ticket by a mysterious black car. Legend says that 12 years ago, a prisoner transport car had an accident near the tollgate killing all the prisoners, but some of the corpses went missing. After that event, murders near the tollgate started happening every February 29.

Strange events took place after the ticket incident which includes random sightings of Ji-Yeon’s doppelganger. When her best friend, Jong-Sook was killed on February 29, two rookie detectives were assigned to solve the case, but they discovered more to it than that.

The movie has quite some jump scares, but the story really bored me. I was expecting a plot connected to the February 29 curse, but it didn’t even give many details about the mysterious car accident and what happened to the missing corpses. The only thing associated with the “February 29” is that the victims were killed on that day for unknown reasons.

There are not many victims either since the location and characters seemed to be limited. At least, Ji-Yeon knew that ghosts only appear in the dark, so she bought lots of lamps and stayed away from the shadowy parts.

The story is a bit confusing too, but then again, it’s another one of those psychological horror movies. The Asian horror flavor did its part well,so in the end, it’s still scary!