The Aswang is a supernatural being who fed on human organs and blood. The appearance of an aswang usually varies from different regions in the Philippines. It is widely known that these myths originated in the province of Capiz since the World War II though there’s no proof about it to this day.

An aswang is popular for its shape-shifting characteristic. It can change its form into a black cat, a bird, a dog or sometimes a pig. Filipinos referred to it as agta, wakwak, abat or manananggal depending on which region it is present.

Yanggaw is an Ilonggo word for infection – a person can become an aswang when it ingest the aswang’s saliva. eg. sharing a drink or a glass with an aswang.

The common connotation of an aswang is that during daylight it appears as a beautiful woman to lure unsuspecting suitors and becomes a hairy monster with sharp nails and fangs in the evening.

Sometimes the word aswang is usually interchanged with manananggal, a woman who separates her body and grows a pair of wings. She feeds on pregnant women using her long tongue to suck out the fetus.

In provinces, people usually accused old men and women who are living alone in the woods as aswang because of their physical appearance and lifestyle.

They are vulnerable in the morning and gain super human strength at night.

The most familiar story I heard about it as a kid was that they like to eat children. If an aswang found a prey, the child tends to become sick and stay in bed for some time. Once given the chance, it will steal the child and replace it with a banana trunk that looks exactly like the child.

I’m not sure if this was a way to scare us, but it was pretty effective.

HOW TO SPOT AN ASWANG

2. Lana – a lana is made of coconut oil mixed with herbs and talismans to ward off the aswang and other bad elements. Most houses in the provinces store a bottle of lana in the altars or windows. When the oil boils in the bottle or overflow by itself, it is a sign that an aswang is near.

3. You can see its real form if you bend over and look at it between your legs.

4. The smell of garlic repels them just like all the vampire movies you had seen. They eat food without garlic or salt.

5. If you suspect that someone is an aswang, simply look into their eyes. Your reflection will be upside down.

6. The unending barking of dogs at night. Dogs senses are high especially with the supernaturals. Have you ever wondered why dogs barked at something you can’t see at night?

7. A person standing or walking in the middle of the night with its body bending backwards.

8. They are always present in places where there are infants, pregnant women or sick people.

9. A black wild boar or pig roaring at night.

10. The foul scent of the tayangaw (a kind of rice bug) is present.

1. The most popular talisman used to scare off an aswang is the ikog sang pagi, an Ilonggo term of a sting ray’s tail. The wound that is hit by the tail won’t be able to heal even if the aswang goes back to its human form.

2. Holy water. Just like all the typical ghost and horror stories, holy water will burn the skin of an aswang.

3. Salt. Pour salt in all corners of the house for protection against the aswang or other bad spirits.

4. Water. Some people place a glass of water in the window to prevent it from entering the house. If water is thrown to an aswang, it will turn back into its human form.

5. Garlic. They don’t like the smell of garlic. Hang garlic outside the doors and windows.

6. In the old times where most people still live in a bahay-kubo or nipa hut, it was easier to hear if something or someone is on the roof in the middle of the night. People would usually shout cursed words and say that they know who is on the roof to scare the aswang off.

7. Don’t walk in the middle of the road at night to avoid being carried away by a flying aswang. Walk on the side.

8. Copper. When walking alone, make sure to bring any copper items or coins. These were believed to give a heavy effect on the aswang and it would be hard for them to carry you away.

9. Pregnant women should wear black to avoid being seen by the aswang.

10. Badjang leaves or Blue Hawaii Colocasia. These were planted outside the house to ward off an aswang. If you have any infants or toddlers at home that won’t stop crying at night and you suspect any supernatural presence, place the leaf under the child’s back.

11. Bagacay or bamboo spikes. These are placed outside the entrance of the house to warn the aswang that you are prepared and equipped to fight.

12. Bolo knife. Put a bolo knife in front of the window to frighten them.

As far as I can remember, the first known aswang was said to be Tiniente (Lieutenant) Gimo. He was the village chief, thus called tiniente. He was feared and called as ang manlalamon or the feeder. There were a few films inspired by his story.

Legend said that his daughter, Maria who was studying in the city invited her friends Juana and Teresa to attend their town feast in Dueñas, Iloilo. A town feast or fiesta is celebrated with colorful costumes, dances and different varieties of food.

The evening before the feast, the three girls slept together on a banig or sleeping mats on the floor. One of them, Juana was feeling uneasy and unable to sleep decided to peek on the window and look at the people who were busy preparing the food for the next day.

She then heard Tiniente Gimo in the next room talking to some people about killing the visitors who was supposed to be sleeping in the middle (Juana) and the other one on the right (Teresa). When the people started to go upstairs, she immediately pushed Maria to the middle and covered the girls’ faces with blankets. They positioned in front of Maria and hit her head with a wood, wrapped her in the mat and carried her body downstairs.

Juana woke Teresa up and escaped the village of the aswang right before they realized that the girl they chopped and butchered was Tiniente Gimo’s own daughter.

Old people claimed that Gimo died a long time ago, but being an aswang he has the power to live again. Up to this day, they are still searching for his grave to make sure he stays dead, fearing the day he would wake up and feed on humans again. 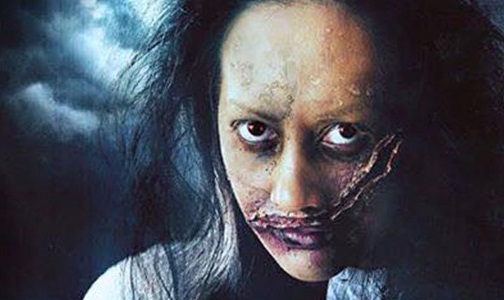 The story of Maria Labo spread like wildfire in the year 2001-2002. There were different versions to her story. She was called Maria Labo in Capiz. Labo is Ilonggo for hacked due to her slashed face. In Cebu, she was known as Lily.

She was an OFW (Overseas Filipino Worker) who worked abroad to support her family in the Philippines.

She worked as a family caregiver somewhere in Europe. Her employer were nice people, but little did she knows that they were flesh-eating/blood-sucking vampires. She already noticed that they were always asleep in the morning and awake at night, but she didn’t made a big deal about it.

Unaware that she consumed some of the human meat that her employers were eating, she became sick and decided to go back to the Philippines.

Unable to control her hunger for flesh, she devoured her only son and was caught by her husband. He then grabbed a bolo knife and hacked her face. She escaped her husband and disappeared out of nowhere. Up to now, the search for Maria Labo is still on going.

Growing up in the famous aswang hub, I have heard numerous stories from different people, young and old especially those living in the remote areas and those who lived to tell their tale. I grew up believing in aswang though I haven’t seen or encountered one.